Shopping Cart
Your Cart is Empty
Quantity:
Subtotal
Taxes
Shipping
Total
There was an error with PayPalClick here to try again

Thank you for your business!You should be receiving an order confirmation from Paypal shortly.Exit Shopping Cart

The Island Of Hvar

The island of Hvar lays in the Adriatic Sea and is the longest Croatian island and one of the most beautiful islands in the World. It is a part of the central Dalmatian archipelago with the area of 299.6 sq km (length 68.2 km width up to 10.5 km) and population of 11,459 inhabitan. Island of Hvar is administratively part of the Split-Dalamtia county in Dalmatia, Croatia.

The biggest places on the island are: Town of Hvar, Stari Grad, Jelsa, Sucuraj and Vrboska.

The Northern coast of the island, with the spacious Stari Grad Bay and a number of coves is much more indented than the Southern.

Crystal clear sea, wonderful bays and pebble beaches, mild climate, lavish vegetation, vineyards, olive groves and endless lavender fields as well as cultural and historic sites, make the island of Hvar one of the most beautiful islands. Thanks to its position open towards the world and on an old nautical route it was the place where different cultures used to meet and influence one another and by doing so left traces visible up to our modern times. Pleasant climate, plenty of sunshine, numerous hotels and restaurants as well as an extensive sports offer attract tourists to the island in summer and in winter. Due to the favorable climatic characteristics health tourism is also developing.

The island of Hvar is famous for its pleasant Mediterranean climate. It has the greatest number of sunny days in Europe.

The island is characterized by gentle winters, warm summers and many hours of sunshine:2.718 hours a year. Maximum temperatures are never too high to render agriculture impossible. The average air temperature during summer months amounts to 25°C and during winter months to 9°C. Snow occurs very rarely. In January there were three snowy days in ten years, and in February only one.

Economy is based on tourism, fishing, farming, viticulture, olive growing and especially on cultivation of rosemary and lavender.

There are three fish canneries on the island of Hvar: Sucuraj ,Vrboska and Hvar. 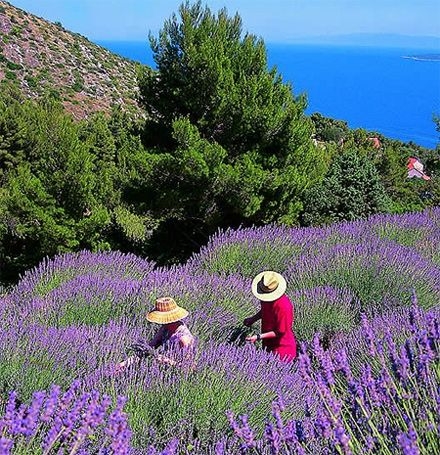 The island of Hvar was populated already in the prehistoric times and later inhabited by the Ilyrians, who came into conflict with Greek colonizers in the 4th century BC. In Oglavak and Koscak (near Sucuraj on the east cape of island) was the position of the Ilyrian queen Tueta place. Numerous tumuli on the island are of Ilyrian origin. Hvar accepted the Greek settlers but was the only one that had an Ionic settlement (Pharos ,today Stari Grad).Hvar played an important role in the Roman- Ilyrian conflicts,when its rules Demetrije Hvaranin tried to preserve its independence. In Roman times, Hvar lost its earlier importance. On the collapse of the Roman Empire, Hvar came under Byzantine rule as well as the entire Dalmatia.

In the 7 th century, island of Hvar came under the Croatia ( kingdom Croatia since 925). In the following centuries Hvar recognized the sovereighty of the Croatian-Hungarian ruler, the Bosnian king Tvrtko, the Split Duke Hrvoje, the Dubrovnik Republic, Venice (1278 - 1797) with an interruption in the period 1358 - 1420, France and Austria. After the first World War, together with the entire Dalmatia, it was annexed Croatia.

In the 16th and the 17th centuries, Hvar was a prominent center of the Croatian literature (Petar Hektorovic, Hanibal Lucic).

There are numerous architectural and cultural monuments in the town of Hvar and other towns and villages on the island, which bear witness to outstanding artistic traditions of the island, the economic prosperity of its population and the relations Hvar used to maintain with cultural centers of the past centuries.